WINCHESTER 243 BRASS.... The 2D mesh rotated into a 3D picture. The calculations were actually performed in 2D since there is a axis of symmetry. The brass is the 243 Winchester caliber and the dimensions were taken from a sectioned Winchester brand empty brass. The brass at the neck and shoulder is in the Annealed condition. For the walls and case head, the brass is in the Full Hard condition. The material properties are listed below.

POWERFUL TOOL.... The LS-DYNA Finite Element Code by Livermore Software Technology Corp is a very powerful tool for calculating the dynamics of 2D axisymmetric structures as well as 3D structures. LS-DYNA was used to calculate the resulting plastic deformations and loads for a 243 Win Winchester brass rifle cartridge case pressurized with a 55,000 psi chamber pressure data. Each calculation used the same geometry and pressure loading and only the coefficient of friction between the cartridge case's wall and the rifle chamber  was changed. Some earlier calculations were done with a ramp pressure curve. Early Calculations.

MATERIALS AND GEOMETRY.... Each calculation took about 5 minutes to run on my Athlon XP 64 computer at 2.4GHz CPU speed. It took about 3 days to generate the mesh from the the photograph, scale it to the correct size, and adjust the mesh density to be finely divided at the points of interest and still have enough reasonable detail in the rest of the geometry. The brass case head and walls were full hard cartridge brass with a yield of 63 ksi and an ultimate of 76 ksi. The cartridge case's shoulder and neck were of annealed cartridge brass with a yield of 19 ksi and an ultimate of 51 ksi. The primer was annealed cartridge brass. The barrel material was 416 stainless steel and was fixed in the vertical direction for 1.25" simulating the thread where the barrel joins the rifle action. The bolt face was 4140 steel that was fixed in the axial direction at its lower surface. There was an ~0.002" radial clearance between the brass and the chamber. There was a 0.006" axial clearance between the brass case head and the bolt surface. This clearance was used to simulate the bolt lug deflection that occurs during firing. The firing pin was not included in the model merely to simplify mesh generation.

THE SECTIONED CASE.... Dick Hatfield sectioned a 243 Win Winchester case with his milling machine and scanned it so I could get the dimensions.
Many places have the outside dimensions of various calibers, but this was the only way I could get the internal dimensions.
The wooden plug was used to keep the clear epoxy from running out while he was allowing the epoxy to cure.

CONCLUSION.... A polished or low friction chamber decreases the plastic strain near the case head and reduces the chance of case head separation on subsequent reloads. 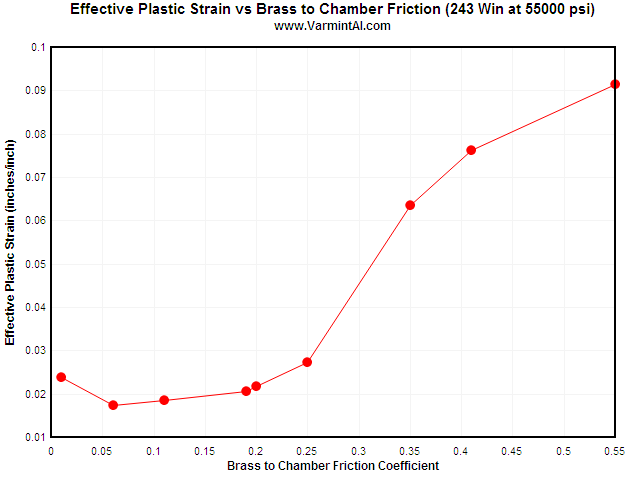 The maximum Effective Plastic Strain vs Coefficient of Friction between the 243 Win brass case and the 416 Stainless Steel chamber. 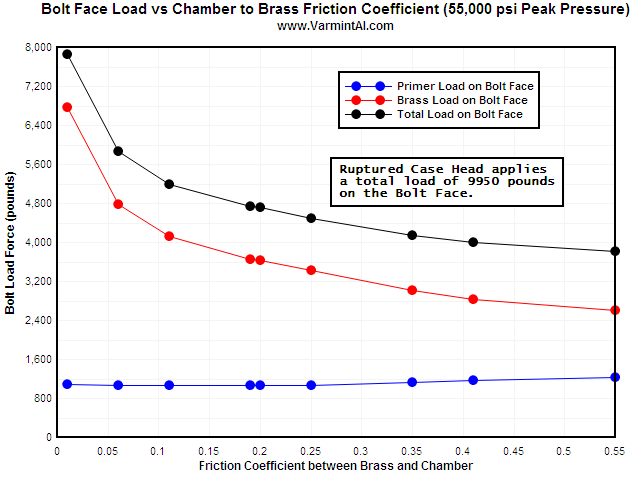 This chart summarizes the bolt load vs Coefficient of Friction between the brass case and the 416 stainless steel chamber's walls. A rough chamber might reduce the bolt load by 1000 pounds but increase the plastic strain in the brass case near the web. Rough chamber finish and/or excessive head space can cause "case head thinning" that eventually results in case head separation on subsequent reloads.

The following charts show the axial load on the bolt face for the primer, brass base, and the sum of the two for various friction conditions. 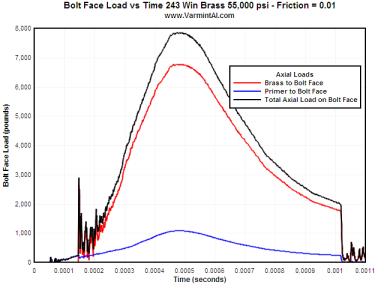 VERY LOW FRICTION.... Very low Coefficients of Friction of 0.01 to 0.11 are very difficult to obtain without extremely polished surfaces and grease. These two cases were calculated to complete the range of numbers and are not practical in the real world. Note that when there is extremely low friction not only does the bolt face load increase but the plastic strain in the case head also increases. There needs to be some axial tension in the wall of brass case wall to increase the resistance to yielding and formation of plastic strain. In each set of movie pictures of Effective Plastic Strain, the picture on the left is the actual deformations and the movie on the right has the deformations amplified by 10X so the deformations can more easily be seen. The same fringe levels for Effective Plastic Strain  were used for each movie. 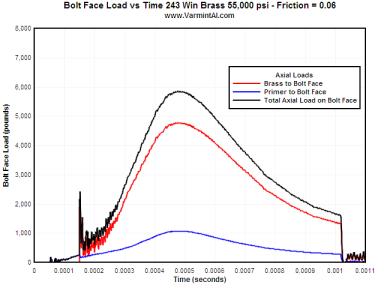 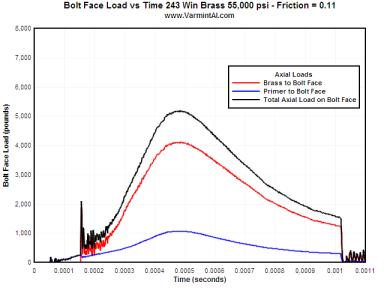 POLISHED AND LUBRICATED.... This level of friction would represent what one would expect with a polished chamber and a lightly oiled brass for Fire Forming. But one would not necessarily use a full 55,000 psi load for fire forming. Note that in the cases with Coefficient of Friction of from 0.01 to 0.10 the brass head contacts the bolt face at about 150 microseconds. The primer contacts the bolt face at about 50 microseconds. There was no firing pin or firing pin forces in the calculations. 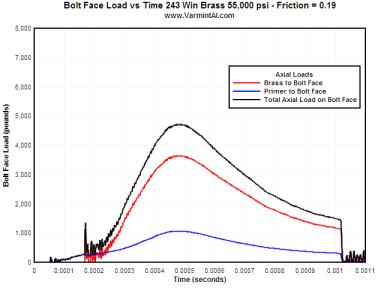 POLISHED DRY CHAMBER.... This is the condition of dry brass and a polished chamber. The peak total load on the bolt face is 4720 pounds. The maximum effective plastic strain is only 0.02 in/in in the case wall where thinning usually occurs. There is very little thinning of the brass forward of the web. 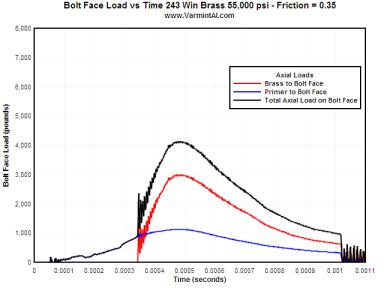 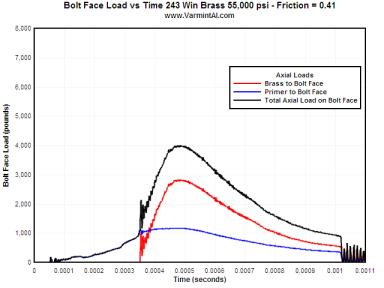 For a rough chamber finish, the brass has to stretch even more before the case head contacts the bolt face. 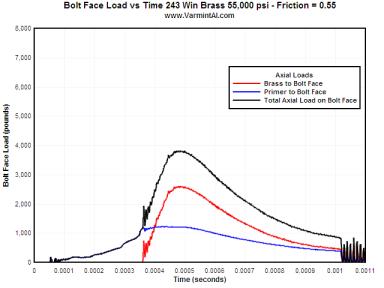 For a very rough chamber with a 0.55 Coefficient of Friction the movie shows the case stretching and thinning
where case head separations usually occurs.

* Peak Loads did not occur at the same time. 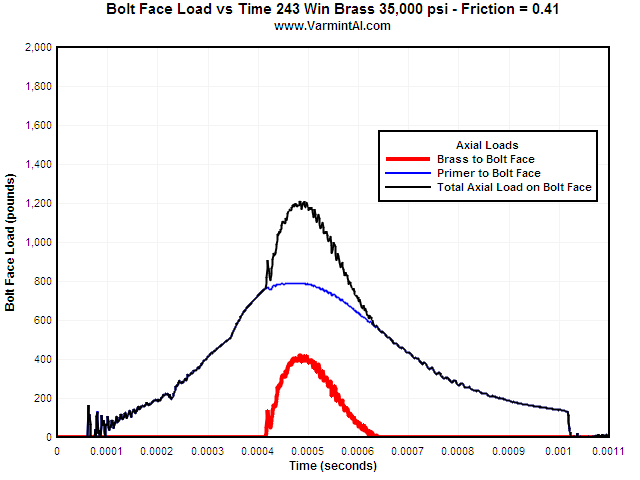 This chart shows the load on the bolt face for the same Win 243 brass but with a peak chamber pressure of
35,000 psi. The high Coefficient of Friction of 0.41 "grabs" the brass and it ends up applying less bolt load than
the primer applies. 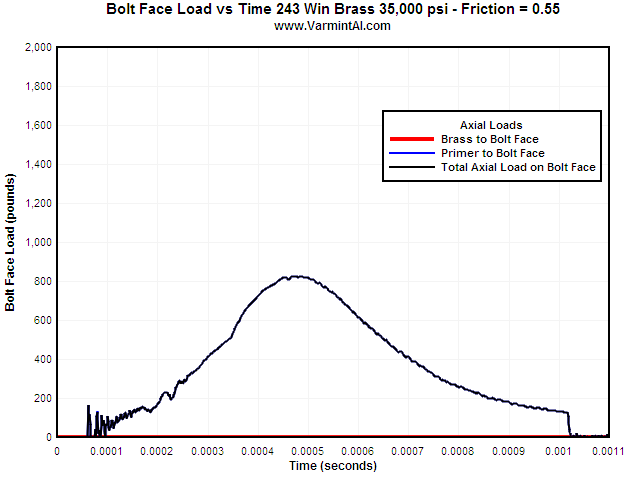 Increasing the Coefficient of Friction to 0.55 the brass case head never does contact the bolt face for the
35,000 peak chamber pressure load. This condition would have the primer protruding slightly.

Table 1: Coefficient of Friction for Various Surface Conditions of 416 Stainless Steel on Brass

* Note: I am not suggesting using lubricant on ammunition brass.
I am merely trying to identify how this low Coefficient of Friction might possibly be obtained. 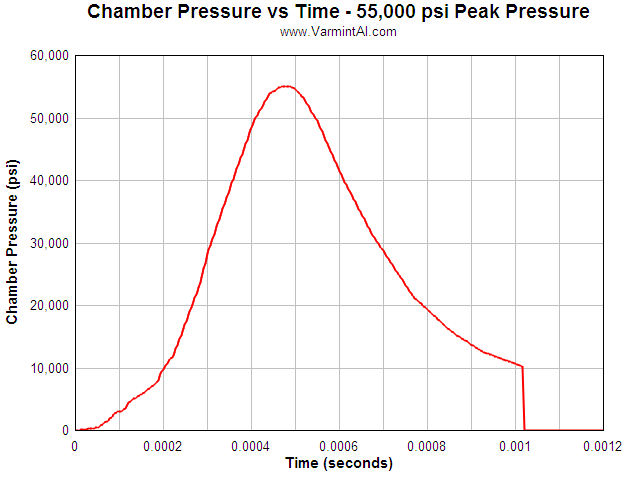 This is the generic chamber pressure vs time curve with a peak pressure of 55,000 psi that was used in the calculations. It is scaled from 6PPC pressure data.

Table 2: The Power Law Plasticity material constants used for the 243 Win Brass in the calculations.

Since the relative motions are extremely small, the static and dynamic
coefficient of friction values are assumed to be the same.

Some reloaders measure the expansion of the unsupported area of the case head with a micrometer. This allows them to determine the maximum load for a particular bullet and powder combination in their rifle. I used the Model 7 action with the 243 Win caliber brass to calculate case head expansion for increases in peak pressure. 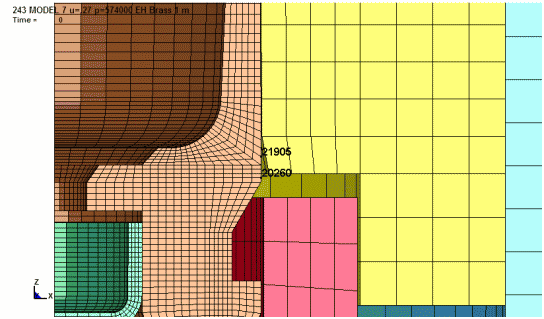 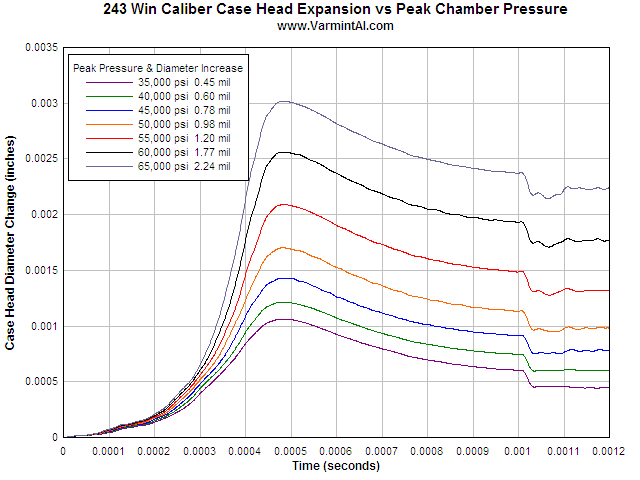 View the FEA model of the Remington Model 7 action including the bolt, action, recoil lug, and barrel. The Analysis page is here.